We have had several discussions on the p320

@Tactical_Reviews @Caw @Jtr @Chuparosa @Minuteman @mquinn55 @PRODAV @RetPara @LonewolfMcQuade @Comanchero45 Quick question for every one! How do you feel about the new sidearm of the United States Military? The Sig p320 is fun to shoot, but there has been some serious questions about it’s safety and quality of parts. Do you think that they should have kept the Beretta M9, or do you think that they should have gone with another route for example Glock 17, 19, Sig 229,226, CZ, or HK. I want to …

My answer “opinion”. Sig 320 are really cheap. The plastic, and design. They stole the design from Steyr and are getting sued. They go off when dropped . Please watch both. Please. If you want to understand where I’m coming from.

Has anyone gotten the update on Sig P320 and its patent infringement with Steyr? I really want to know considering I’m thinking about designing a gun for a game which might just use a similar technology and unsurprisingly I don’t want to get into lawsuit thing.

How do you feel about the Sig p320 as a pistol for serious use?(HD, SD, Duty,SHTF, etc etc)

Guess SIG bribed bigger to get the US contract.
Any doubts?

I think the second you mention a government contract… bribe is implied. That being said, I was an early adopter of the 320 and It is my EDC and my competition gun. I think I really started to love the gun after the recall.

Beretta did the same thing. Yet people tout the M9 is as the best handgun in the world, despite it only beating the P226 out by price. I don’t understand why people act like the P320 is such an inferior choice in a market that is completely saturated by plastic double stack 9s, when in reality, it can easily sit on the podium.

P320/M17 is a great gun. That doesn’t mean that Sig get’s a pass for it not being drop-fire safe on release, but in it’s current state, it’s one of the best handgun on the market in my opinion. I shoot an M9 for work, I’ve shoot Glock 17s and 19s, but I own two P320s, and I can honestly say its my preferred handgun.

Now excuse me while I go build a pillow fort to keep out all the haters.

Ive owned a half dozen p320s. Ive had two with issues that really rubbed me wrong. One of the FCUs would not seat right , it came out of spec then the other one would not feed right. Sig never told me what the issue was but they fixed both issues. This is why I think its just teething problems. its a nice pistol and their parts and materials are good ( I have looked up and compared their polymer, barrels etc to Glock, CZ etc and its similar)but QC is not there yet , imo. Sig does not take QC as serious as Glock, CZ, HK, etc, imo.

Also, there are quite a few police agencies and militaries switching to Sig p320s. The U.S. military has had issues with the Sig out of the gate but that was over a year ago and it appears Sig is at least attempting to fix the issues. If they really are fixing all these issues and the feedback from the various users is not too bad then I might consider getting a couple compacts in .45 acp here in a year or so.

I do think the U.S. military might have been a little bias in their pistol selection but I am not going to say there is some big conspiracy here. If there was then these countries must be in on it too. (Maybe its an NWO thing…)
We will be able to tell real soon if the issues are fixed, theres only several militaries and dozens of LEAs running them now.

Back in April we reported that the Danish Armed Forces had selected the SIG Sauer P320 X-Carry. Trials of new pistols to replace the venerable SIG P210 began in late 2017. The Glock 17 Gen 5, Beretta APX, Canik TP 9 SF, and the SIG P320 X-Carry...

Back in November we reported that the Norwegian police service was looking for a new service pistol. SIG SAUER have now announced that they have won the tender and will provide Norwegian officers with the P320 X-Series.

Hot on the heels of the news that Florida’s Tampa PD have adopted the SIG Sauer P320, two more law enforcement agencies have followed suit. Arkansas’ Jacksonville PD and the Texas Department for Public Safety have also selected the P320 as their new...

According to a press release from SIG Sauer, published on 11 June, Tampa PD have opted to replace their current Smith & Wesson M&P duty pistols with the P320. Tampa PD will purchase 1,375 P320s to equip officers, although no calibre was...

Sumter, South Carolina's police department is set to transition completely to SIG Sauer pistols. The department will move away from its current Glock duty pistols including the Glock 43 currently carried as an department issued backup pistol.

SIG Sauer have announced that Alabama’s Montgomery Police Department will be adopting the SIG P320 as their next official duty pistol. The department has over 500 officers, currently armed with Glocks. SIG have been enjoying a steady stream of law...

The Virginia State Police look to be the latest in a string of recent law enforcement agencies to adopt the SIG Sauer P320 as their next sidearm. It follows recent contracts from police departments across the country including Tampa...

boy does SIG have their fingers deep in the pocket of law enforcement.

with that being said - a government organisation has X dollars/euros/krone and when they are offered a product that meets their requirements (and budget) than that is what they buy.
Is the M9A3 better, was the Glock better ?

Here's Why the U.S. Army Won't Be Using Glocks

Despite its popularity, it didn’t make the cut.

Here’s Why the U.S. Army Won’t Be Using Glocks
Despite its popularity, it didn’t make the cut.
Perhaps most importantly, price is always a factor when it comes to government contract, and Sig undercut Glock’s bid by a wide margin. Sig’s bid came in at just about $169.5 million, a whopping $103 million less than Glock’s.

I agree about Sig having their hooks in LE but you could say the same for Glock, who has coasted on LE sales for years. Both also have “superb” marketing to help with sales. The selection has been made in multiple countries militaries and quite a few LEAs, not just the U.S… Glocks main problem is not just price(although this is probably the biggest factor), its also modularity requirements.

This is from the comments section of a p320 video.

" 1) The p320/m17/m18 doesn’t require the trigger be pulled for field stripping like glocks do- and some of those glock NDs account for accidental injuries and deaths every year in agencies and militaries around the world because humans aren’t perfect. 2) Modularity allows armorers an overall easier job of replacing broken guns and broken parts. 3) Metal trigger versus glock’s plastic trigger. 4) More natural grip angle that is almost identical to that of the existing Beretta M9. 5) $100 Million dollars cheaper for U.S. Taxpayers. 6) Grip modules are a lot harder to lose than backstraps."

That is always the best answer. The p320 fits my hand better but Glock has a much better track record and far better QC last time I checked.

I have simply had such a long bad track record dealing with SIG and their polymer garbage pistols (as well as their garbage customer service) that I seriously refuse to buy another one.
The only pistols from SIG that I have confidence in are their P series pistols, which unfortunately are too damn heavy for daily carry imho.

Their p series have the same issues as the polymer pistols , the QC sucks. They even use mostly the same steel/materials/quality of parts(outside of the Polymer). The slides, barrels etc are made out of the same stuff. My U.S. made p226 had issues ,my German Sig was much nicer. I honestly do not care for Sig USA as a company ,although I really want like the p320.

I hear you brother…get on Sig forum sometime and see how many of the fanboys are discussing issues. Very common. The only steel Sigs I owned were all old police trade ins that I am sure had had the bugs worked out of them long ago. My P229s and P220s were solid, but they were from an earlier generation as well. Sig is one of those companies I’d really like to love, but just can’t justify it. Any company that uses its customers to find and work the bugs out of their products without doing it first themselves just sucks and is not worth my time and money. I’ve honestly had way better luck with Taurus pistols than with Sig. And Taurus usually does a really good job of fixing their problems without making the customer pay for it (yes, I know there are always exceptions).
The other thing I hate about Sig is trying to get repair parts. They must be sent to a certified Sig armorer…unlike Glock, where I can buy any part of their pistols all day long…and for cheap.

It sucks what Cohen (Sp) has done to Sig USA. Sig used to be on par with HK and Walther but those days are long gone. 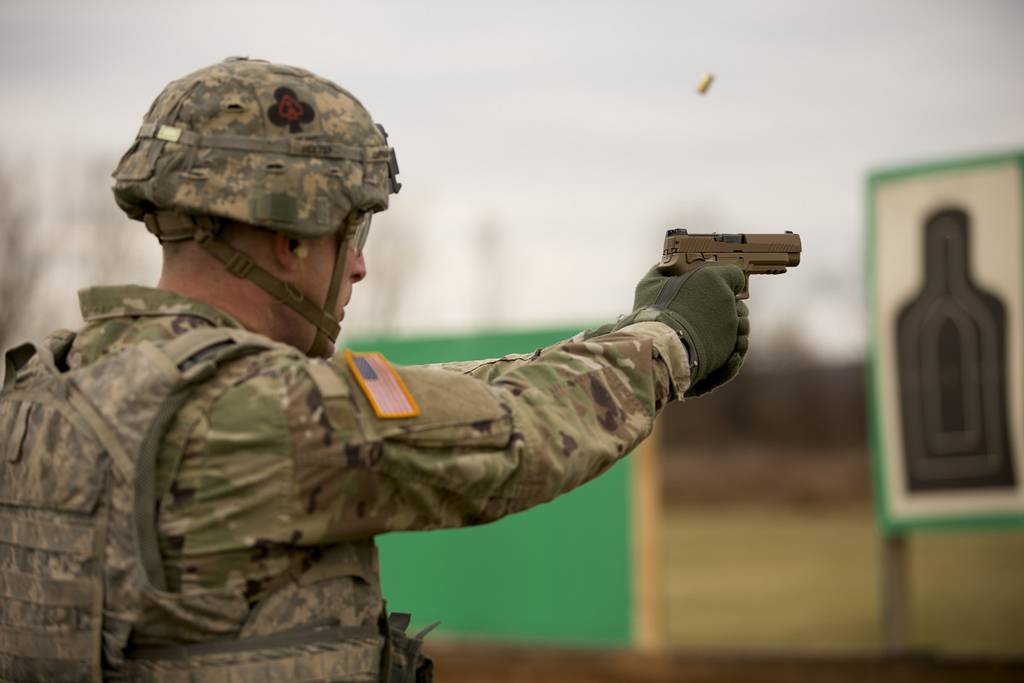 The Army is working to fix problems with its new handgun after critical DoD... Canadian media outlets have reported that a member of Canada's elite Joint Task Force 2 was wounded in the leg when his pistol allegedly misfired. The accident occurred last November when the operator was training with a newly purchased SIG...

If I pull the trigger fast enough, I can get one of my pre-“voluntary upgrade” P320s to blow an extractor every third or fourth round. I could fix it, but I keep it like it is as reminder…

P320s to blow an extractor

How does an extractor cause that?