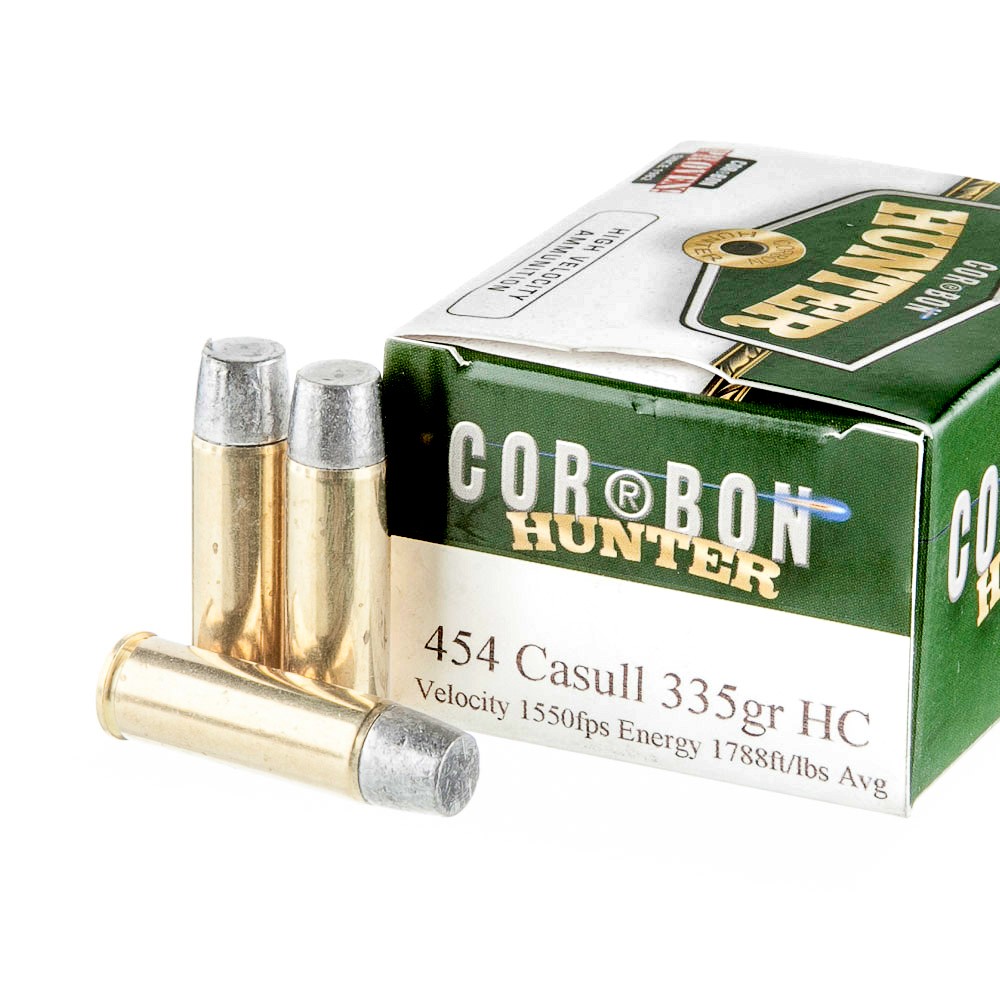 For those who love big bore revolvers, the .454 Casull (pronounced like KA-sool) is often a favorite. Longer than the .45 Long Colt and much more powerful, this ammunition spent more than half of its life as a popular wildcat, not becoming a standard, factory round until it’d been in the handloader arena for over 40 years.

When it comes to size, the .454 Casull ammo comes in a .45 Colt case that’s lengthened about .10 inch, giving the shell a length of 1.383 inches. The .452-inch diameter lead bullet sits in a .480-inch diameter straight-rimmed case, making the total cartridge length reach 1.77 inches.

Bullet weights are most commonly found between 240 and 300 grain (gr), and muzzle velocities approach 1,900 feet per second (fps) with energy at the muzzle exceeding 2,000 foot pound force (ft·lb).

The ammunition is loaded under a high pressure, and even uses a small rifle primer instead of a pistol primer. These cartridges can be loaded to a maximum pressure of 65,000 pounds per square inch (psi) and can create over 60,000 copper units of pressure (CUP) when fired.

When it comes to big bore ammunition, the .454 Casull, which was originally proposed as the .454 Magnum, significantly dwarfs the other three magnum cartridges (.357 Mag, .41 Mag, and .44 Mag), not just in size, but also in performance and power. And it’s this power that’s made the .454 Casull one of the most powerful handgun cartridges in the world, a wildcat that’s evolved into a heavy-hitting hunting round that can take down anything the American wild provides.

Development of the .454 Casull Cartridge

In 1957, Dick Casull, a gunsmith from Utah known for making wildcat cartridges, joined forces with Jack Fulmer and set out to develop a handgun hunting round that could not only take down any of North America’s large game, but also protect its shooter against any of the apex predators they may encounter while on the hunt.

Casull and Fulmer took the .45 Long Colt case and both lengthened it and thickened the shell’s wall, making it stronger and more durable. They filled this casing with a triplex load of propellants, starting with a quick-burning powder on the bottom, a slow-burning powder in the middle, and then topped them with the slowest-burning powder, using the compression from the bullet to keep the majority of the powders separate. This created a progressive burning that lead to a progressive acceleration of the bullet as it moved through the barrel. They then capped it with a bullet weighing 300 gr. When fired, the lead bullet blazed down range at 1,600 fps.

In November of 1959, Guns & Ammo writer P.O. Ackley gave the initial public mention of the newest, hottest wildcat, the .454 Casull – a powerful cartridge for large game and the first handgun ammo capable of taking the largest animals on the planet. It’s even been claimed that .454 caliber ammo has sufficient accuracy and energy retention to take medium-sized game as far as 200 yards out.

Although .454 Casull ammo has been loaded and reloaded by people for decades, it wasn’t accepted by the Sporting Arms and Ammunition Manufacturers’ Institute (SAAMI), the organization that sets and publishes the industry standards when it comes to ammo, as an official cartridge. It was simply too hot, with too much energy and too much power.

Finally, in 1998, SAAMI included the .454 Casull in its listing, taking it off the wildcat market and classifying it as an official ammunition cartridge, but not with some significant changes to ensure safety and reliability. By SAAMI standards, the .454 Casull must include:

Although it may have taken SAAMI decades to see the value in the .454 Casull, big bore lovers knew it was a round that was sticking around. In 1983, Freedom Arms released the first commercially available .454 Casull revolver, the Model 83 – a revolver of the highest quality. Not only was it superb in construction, but the Model 83 was designed to handle the extreme pressure created by the Casull.

The Model 83 was made out of stainless steel and, in its standard form, featured a seven and one-half inch barrel, and weighed in at 50 ounces. A five-shot single action, the wheelgun also came with interchangeable cylinders to fit the .45 ACP and .45 Colt, in addition to the .454 Casull. With practice, the accuracy of this centerfire revolver is astounding and it’s not uncommon for experienced shooters to get groupings of three to four inches at 100 yards, even with full-powder loads.

The excellent fit and finish of the gun partly contributed to the performance and popularity of .454 Casull ammo. With a cylinder gap measuring less than three thousandths of an inch (0.003), the entire pistol enjoys an immense level of precision, which allows the cartridge to achieve maximum efficiency and full-potential performance.

While Freedom Arms was the first manufacturer of .454 Casull revolvers, they were by no means the last. In 1995, Ruger released the Super Redhawk and in 1998, Taurus followed suit with its Raging Bull. Although both of these wheel guns are fine guns in their own right, neither these nor the other firearms chambered for .454 caliber ammo that came after them, have come close to the level of precision found in the Freedom Arms revolver.

Some of the other popular firearms chambered for the .454 Casull include:

Like many big bore rounds, the variety of .454 Casull ammunition is broad and shooters can find it produced by many manufacturers. Bullets are also available in numerous iterations, including:

When it comes to hunting big game or predator protection, several excellent ammunition choices are available. For instance, Winchester sells their partition and dual bond bullets in .454 Casull, and Federal sells its Fusion and Vital-Shok bullets with high-quality hunting loads. Other ammunition companies that manufacture the .454 Casull include Hornady and Magtech.

The .454 Casull cartridge is not the right ammunition for everyone. Because of its sheer size and power, novice shooters should take caution, especially if they have small frames. But with practice and proper safety protocol, most seasoned shooters can handle this big bore round, even with its powerful punch.

When considering the power of the .454 Casull, it’s not just the size of the bullet shooters are contending with. The Casull is loaded with a lot of powder, and that heavy bullet travels out of the muzzle at a supersonic speed, with massive amounts of power and pressure behind it. To say that this creates a strong recoil is an understatement. Recoil of the .454 Casull is almost five times greater than the .45 Long Colt. And compared to a .44 Magnum, the recoil of the Casull is about 75 percent greater.

That’s a whole lot of force on wrists and hands, especially for women and seniors. But don’t fret, there is a solution – shooters can easily practice with lighter loads, specifically the .45 Long Colt. In the same way that .38 Special ammo can be fired from revolvers chambered for the .357 Magnum (and .44 S&W Special rounds can be shot from .44 Magnum revolvers), those looking for a lighter load can use .45 Long Colt ammo in lieu of .454 Casull when shooting revolvers designed for the latter round. Also, shooters can opt for .45 Schofield ammunition instead of .454 Casull, both popular options for both comfort and economics.

Shooting from a .454 Casull Revolver: A Safety Note

A special note on safety when shooting .45 LC and .45 Schofield from a .454 Casull chambered firearm. In the section above on SAAMI requirements, the need for a thicker jacket for the .454 Casull was mentioned. When shooting factory .454 caliber ammo, this is taken care of, but when using the smaller cartridges in a .454 revolver, the jackets on these bullets aren’t beefed up to the .030-inch thickness. While they fire just fine from anything chambered for the .454 Casull, they do leave a ring of lead residue in the cylinder. This doesn’t hurt the firearm while shooting, but if the shooter were to switch to a full-sized .454, it could cause some significant problems.

This means whenever the smaller ammunition is used, the shooter must breakdown the firearm after the day’s training and clean the revolver. If not, when they pick up the firearm again and load it with .454 Casull ammo, the bullet could hit this ring of lead and cause significant damage to both the revolver and the shooter. This is not theoretical and it has happened, so proceed with caution.

Due to the .454 Casull spending most of its life as a wildcat round, it’s been a favorite among handloaders, especially those who like big bore cartridges for plinking and practicing. Like some of its Magnum peers, it’s difficult to find cheap .454 Casull ammo on the market. It’s also hard to find light loads in this round, which is why many handloaders make their own.

Over the last 60 years, with the innovations in black powder and ballistic technology, the handloading specs for all ammunitions, but especially those loaded hot, have changed. That’s why it’s necessary for reloaders to always look at the latest handloading data to ensure safety of everyone involved.

As a side note, many handloaders weaken the round, keeping the pressure under 36,000 psi. With this drop in pressure, the ammo’s velocity drops to between 875 to 1,200 fps, making the .454 Casull much easier and more enjoyable to shoot.

History of 454 Casull Ammo originally appeared in The Resistance Library at Ammo.com.

I really like my Taurus 454 and loading for it, have yet to shoot any factory ammo, I load 45 LC Cowboy style loads up to 350 grain hard cast with a healthy dose of Lil’ Gun. The heavy loads are a handful.

Dick Casull and his personal 454

@HighlandsPatriot is that a Winchester 94 carbine?

Rossi 92 actually it’s a Puma imported by Legacy, but I think Rossi made it, I don’t think the 94 would handle the 454

Man, that it nice and I really like your scabbard I agree the 94 would not handle that kind of pressure, but I am no expert by any means. I do have a 94 in 30-30

Can’t really see in the picture but it was the 100th anniversary,

BTW that load should do the job on anything you run into I usually run 45s through mine except when bear hunting and have not done any of that lately.

I have a 9 1/2" barrel on my Ruger super Redhawk. Burris 2X scope. Does a good job on deer. Always wanted to take it bear hunting. Just haven’t yet.

I get a tag every year, always wanted to blast one with a revolver. never seen one.
Hound hunting banned here in WA.
Always have my trusty Ruger 45 with me just in case.

Yep w/the 4 5/8 the muzzle blast is something with the hotter ammo.

A man who never once ate a “veggie burger” in his entire life.