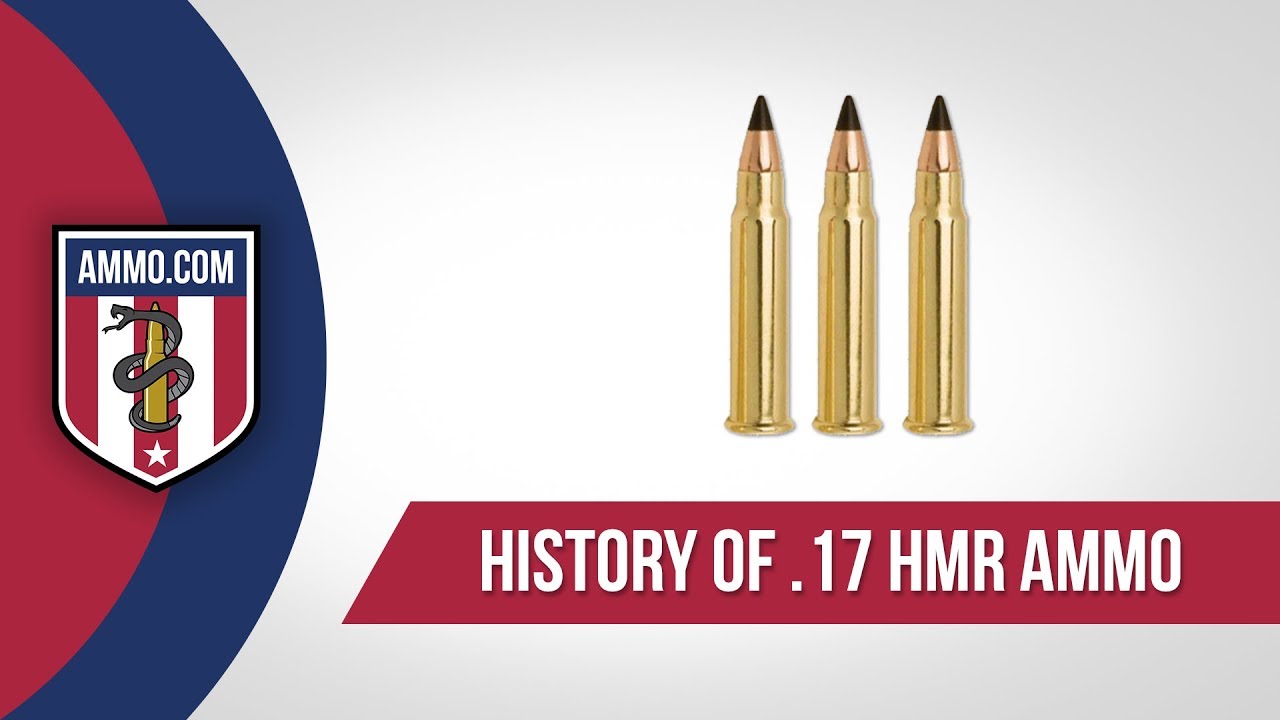 Introduced by Hornady in 2002, the .17 Hornady Magnum Rimfire (HMR) was designed for shooters who desire a fast, lightweight rimfire cartridge. It’s especially popular among varmint hunters, who prefer the .17 HMR for its high velocity and flat trajectory.

The .17 HMR has impressive ballistics. Bullets weigh between 15.5 grains and 20 grains – ammo this small, propelled by the comparatively large powder loads in the .22 Magnum case, travel at high velocities. Some loads have a muzzle velocity as high as 2,550 feet per second. But even with those high speeds, muzzle energy for this round is only about 250 foot pounds, which is plenty for shooting varmints and targets at long distances.

Before Hornady released the .17 HMR, it was already popular. This is because many wildcatter rounds were already attempting to do what Hornady achieved with this round, which was to match the ballistics of the 5mm Remington Rimfire Magnum (an obsolete round and the fastest rimfire cartridge in history). Many people previously using the 5mm switched to .17 caliber rounds, so the .22 Winchester Magnum Rimfire round was the natural parent round, as this was commonly available, longer and stronger than any viable alternative.

In practice, the .17 cal wildcats were far better both in terms of velocity and flat trajectory compared to their 5mm alternatives. Hornady developed this round in conjunction with fellow rimfire manufacturers Marlin, Sturm and Ruger. For the most part, the .22 WMR rounds required only a simple barrel change to outfit firearms for the .17 HMR.

The new ammunition and rifles hit the market in 2002, with the ammo considered expensive due to being a high-performance round. Still, compared to other centerfire rounds, it was a relatively affordable entry into the market. In 2004, CCI, Federal and Remington introduced their own versions, showing the widespread appeal of this performance-oriented round. Other companies offering .17 Hornady ammunition include Sellier & Bellot, Winchester and PMC. Each company loads the round with different bullets, making for significant differences between brands. Remington offered a warning and product recall, warning people of potential safety risks regarding using the rounds in semi-automatic weapons.

Wildcat cartridges have long-filled gaps in the ammunition market. These customized cartridges include any round that is not mass produced. In addition to filling gaps in the market, they also respond to highly specialized demands from very particular customers. Some wildcat rounds emulate previously existing rounds that have been taken off the market. Others are modifications of commercial rounds, changed to alter one or more properties for performance. This is a hobby by and for hardcore shooting enthusiasts with highly specific needs.

Sometimes wildcatting is an offshoot of handloading. Wildcatters take rounds and reload them, changing specifications. Sometimes, these are sold. Other times they are for the personal use of the reloader himself. Large companies do not make wildcat rounds for a few reasons. First, the demand is very low. Second, wildcat rounds are by definition something not manufactured by a large enterprise. Third, SAAMI and other standards do not exist for such rounds, opening them up to potential legal liability.

Due to the success of the 17 HMR, both in terms of sales and performance, Hornady introduced the .17 Hornady Mach 2 (or the 17 HM2), a modification of the original ammunition. This was rolled out in 2004, and was based on the .22 Long Rifle “Stinger” casing. Most bolt action rifles can be converted to a 17 HM2 with a simple barrel change.

The HM2 is a slower round than the HMR, and might not live up to its “Mach 2” name, depending on overall conditions. It’s also unlikely that a semi-automatic rifle can be safely converted to use HM2 rounds.

When compared alongside the .22 LR, the .17 HMR is commonly thought of by those searching the market for the perfect round. Indeed, these are considered two of the best rimfire rounds on the market today. So which one is right for you?

The short version is that .22 Long Rifle round is better suited for plinking, shorter range and small game. On the other hand, the .17 HMR is for skilled operators, longer ranges and varmints. The price difference is significant, but you should shop based on purposes rather than cost. It’s worth noting that the .22 Long Rifle is a more readily available round as well, but this is changing as the .17 HMR becomes more popular. It’s also worth noting that the .22 LR is one of the more affordable centerfire rounds on the market today.

Accuracy of .17 HMR ammunition is almost as good as the velocity. For even the casual shooter, the cartridge easily shoots one-inch groups off the bench at 100 yards. The maximum lethal range for shooting varmints is somewhere between 150 to 300 yards, contingent upon the ability of the shooter and current weather conditions. And since .17 HMR bullets are so lightweight, the trajectory is affected more by the wind compared to heavier bullets. This adds to the challenge and fun for some.

Several companies produce .17 HMR ammo today – including CCI, Federal, and PMC. Winchester and Remington sell the cartridge with polymer-tipped bullets, hollow point bullets, and soft point bullets. Manufacturers also offer rifles chambered for .17 HMR including Savage, Marlin and Ruger. These rifles are primarily bolt action, but a few semi-automatic rifles (and even some revolvers) are made for this cartridge.

The .17 HMR is fun to shoot and also a deadly accurate rimfire cartridge. It’s great for an experienced shooter who wants the challenge of extremely light bullets at extremely long ranges.

History of 17 HMR Ammo originally appeared in The Resistance Library at Ammo.com.